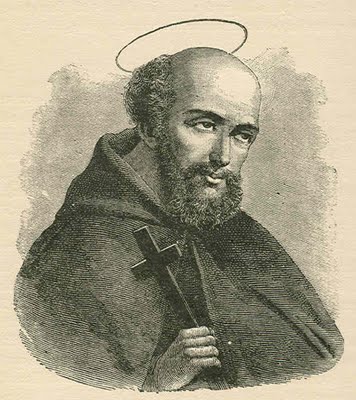 St. Paul of the Cross

The eighty-one years of this Saint’s life were modelled on the Passion of Jesus Christ. In his childhood, when praying in church, a heavy bench fell on his foot, but the boy took no notice of the bleeding wound, and spoke of it as “a rose sent from God.” A few years later, the vision of a scourge with “love” written on its lashes assured him that his thirst for penance would be satisfied. In the hope of dying for the Faith, he enlisted in a crusade against the Turks; but a voice from the Tabernacle warned him that he was to serve Christ alone, and that he should found a congregation in His honor. At the command of his bishop he began while a layman to preach the Passion, and a series of crosses tried the reality of his vocation. All his first companions, save his brother, deserted him; the Sovereign Pontiff refused him an audience; and it was only after a delay of seventeen years that the Papal approbation was obtained, and the first house of the Passionists was opened on Monte Argentario, the spot which our Lady had pointed out. St. Paul chose as the badge of his Order a heart with three nails, in memory of the sufferings of Jesus, but for himself he invented a more secret and durable sign. Moved by the same holy impulse as Blessed Henry Suso, St. Jane Frances, and other Saints, he branded on his side the Holy Name, and its characters were found there after death. His heart beat with a supernatural palpitation, which was especially vehement on Fridays, and the heat at times was so intense as to scorch his shirt in the region of his heart. Through fifty years of incessant bodily pain, and amidst all his trials, Paul read the love of Jesus everywhere, and would cry out to the flowers and grass, “Oh! be quiet, be quiet,” as if they were reproaching him with in-gratitude. He died whilst the Passion was being read to him, and so passed with Jesus from the cross to glory.

MORE ON SAINT PAUL OF THE CROSS 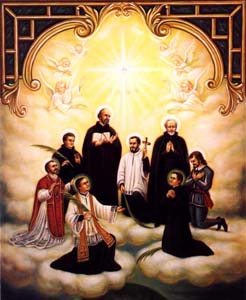 Holy Martyrs and patrons, protect this land which you have blessed by the shedding of your blood. Renew in these days our Catholic faith which you helped to establish in this new land. Bring all our fellow citizens to a knowledge and love of the truth. Make us zealous in the profession of our faith so that we may continue and perfect the work which you have begun with so much labour and suffering. Pray for our homes, our schools, our missions, for vocations, for the conversion of sinners, the return of those who have wandered from the fold, and the perseverance of all the Faithful. And foster a deeper and increasing unity among all Christians. Amen.
-Jesuit novena prayer to the martyrs