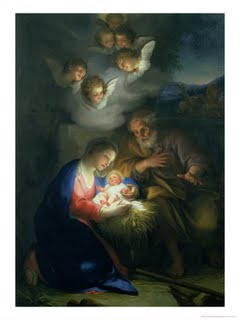 Say 15 times a day
from St. Andrew’s Day
November 30 – December 24 (Christmas Eve)
Hail, and blessed be the hour and moment at which
the Son of God was born of a most pure Virgin at a stable
at midnight in Bethlehem in the piercing cold.
At that hour vouchsafe, I beseech Thee,
to hear my prayers and grant my desires.
(Mention your intentions here)
Through Jesus Christ and His most Blessed Mother. Amen
It is piously believed that whoever recites the above prayer
fifteen times a day from the feast of St. Andrew,
on November 30th, until Christmas will obtain what is asked.