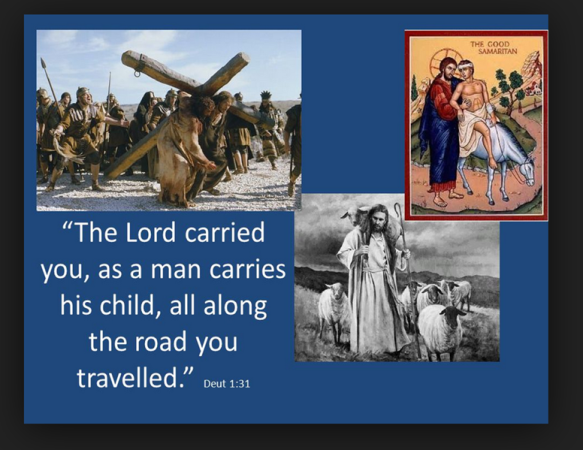 In the picture above we also see another form of carrying, we see Jesus as the Good Samaritan assisting and carrying the wounded man who had fallen among robbers to help and safety.

What a beautiful image it is. But how topical is this image, how real? Very, very real, how often, tragically on our streets people are attacked, robbed, stabbed, abused in one way or another.

In the Gospel Jesus shows us through the action of the Good Samaritan what the perfect response is, to go to our neighbours help. Out of this tragedy and sin we also see courageous, ordinary men and women who rush to the aid of others……. These are our modern day hero’s and heroine’s, our good Samaritans!!

Sadly, another response is possible, depicted in Our Lords parable here by two types of person, priest and Levite, who pretend they don’t see anything and hurry quickly by. Of the two the one who drew near to the wounded man and then left doing nothing. Something like what we see on a media when all people can think of is take pictures on their phones!!

The Samaritan on the other hand was full of compassion and did not count the cost, so beautiful.

Love is shown in deeds, in action by caring and getting involved. Let us pray today for all those who will encounter violation of their person in one way or another that God will send a ‘good Samaritan’ to assist them and pray for all those who dictated to by fear who in in the face of potential dying or death avoid getting involved. In our own strength we cannot do it but in and with Jesus we can.

This is my prayer to you,

my prayer for your favour.

In your great love, answer me, O God,

with your help that never fails:

Lord, answer, for your love is kind;

in your compassion, turn towards me.

But the man was anxious to justify himself and said to Jesus, ‘And who is my neighbour?’ Jesus replied, ‘A man was once on his way down from Jerusalem to Jericho and fell into the hands of brigands; they took all he had, beat him and then made off, leaving him half dead. Now a priest happened to be travelling down the same road, but when he saw the man, he passed by on the other side. In the same way a Levite who came to the place saw him, and passed by on the other side. But a Samaritan traveller who came upon him was moved with compassion when he saw him. He went up and bandaged his wounds, pouring oil and wine on them. He then lifted him on to his own mount, carried him to the inn and looked after him. Next day, he took out two denarii and handed them to the innkeeper. “Look after him,” he said “and on my way back I will make good any extra expense you have.” Which of these three, do you think, proved himself a neighbour to the man who fell into the brigands‘ hands?’ ‘The one who took pity on him’ he replied. Jesus said to him, ‘Go, and do the same yourself.’