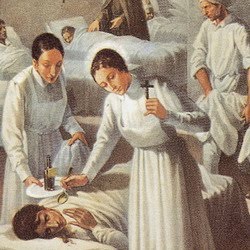 Founded a home dedicated to the spiritual needs of young girls, and a school for deaf children. In 1840 she became the superior of the Handmaids of Charity, nuns who cared for the sick, and she took the name Mary Crucifixa.

Paola Di Rosa, whose religious name was Maria Crocifissa Di Rosa (1813 – 1855), was one of those rare figures, who in reaching out to others, seemed to have an angelic quality about her. Born in Brescia in 1813 to a well-off family, very early in her adolescence Paola had to come to terms with the death of her young mother due to a terminal illness. This situation made her realize that life cannot be considered a pleasure for rich people and a Calvary for the poor, but a trial for everyone, to face and to take account of . It is quite possible, that this understanding of Paola’s at such a young age was the beginning of the process which would evetually culminate in the great fruits of the Charity hospitals. Thousands of patients in hospital wards, thousands of children in schools, thousands of young girls saved from the streets, thousands of young people brought up and educated and old people cared for, recognize and are grateful to the Handmaids of Charity who have followed the loving example of their founder. Paola was the daughter of an industrialist from Brescia, who was very good at business, although he was not overly preoccupied with money. Paola’s mother died when she was 11 and she was sent to a boarding school run by the Visitation sisters.

When she was 19, Paola became the manager of the spinning mill in Acquafredda and there she befriended the girls who lived away from home from Monday to Saturday. Her father began to realize that his daughter’s strong personality would never accept the ties and restrictions of family life.

With the cholera outbreak in Brescia in 1836, Paola became a nurse and assisted the sick women of the town, with constant love and devotion. She soon discovered that goodness in itself had a value far greater than any company or firm, her father could ever offer her. While taking care of the women in the old people’s home “Casa d’industria” as well as devoting attention to the young girls in moral danger, she founded two schools for deaf and dumb people. At last the “Pia unione” began to take on a definite form, it would later become the very large congregation of the Handmaids of Charity. But where did this frail and weak woman find the time and the strength for so many activities? Her weak health would result in her death at the early age of 42. She would get up 2 hours before dawn and immerse herself in mental prayer. She would attend Mass in the Cathedral, in the company of her maid. She would then spend a further two hours in an intense dialogue with God. In this way her morning illuminated the day that lay ahead. The first Handmaids were nurses and they joyfully followed Paola, providing prolonged medical assistance to the sick.

The charitable association of the Pia Unione, which at the beginning was so small as to be almost invisible, had its most important test during the war for Independence (1848) and in the “Ten days of Brescia”, during which Brescia resisted the Austrian invader and became known as the “Lioness of Italy”. Love remained the most important feature of the Pia Unione, that later became the Congregation of the Handmaids with the three vows, thanks to its prompt ratification by Pope Pius IX. The new congregation spread to various towns throughout Italy. More and more places providing sanitary services were founded in Italy and abroad. With her religious profession, Paola took the name of Maria Crocifissa. Her frail health brought her to a premature death in December 1855. However, the congregation, still exists, fruit of a love that is eternal, just as God is.

Extracts from F. Mollinari, Maria Crocifissa Di Rosa a Saint for Others

Mary di Rosa would go out at a moment’s notice if she felt that someone needed her help. The next time someone you know needs your aid, don’t put off helping and make excuses. Drop what you are doing and give them what they need.

Saint Mary Di Rosa, you weren’t afraid to take new opportunities. It’s frightening when we are asked to do something that is different or new. We would rather stay in our safe and comfortable routines. Help us to embrace each obstacle in our path as a new opportunity to serve God. Amen