This is a humble invitation to those seeking a blessing from the relics of Blessed Louis and Zelie Martin, the parents of St. Therese of Lisieux.
Mass times:
Saturday 5 PM vigil
Sunday 7 AM, 9 AM, 10:30 AM, and 12 noon 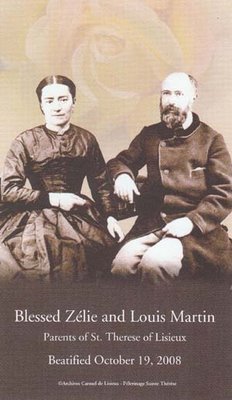 Blessed Louis and Zélie Martin, pray for us!

This Weekend, July 11-12, we will remember the special feast day of the Blessed Louis and Zélie Martin, the parents of Saint Thérèseof the Child Jesus and of the Holy Face. Their feast day is celebrated on July 12, which is a Sunday this year. Pope Benedict chose thisdate for their feast day because the Martins were married on July 12, 1858. A beautiful framed tapestry of Blessed Louis and Zélie alongwith Saint Thérèse will be displayed in the sanctuary next week. After all the Masses there will be an opportunity to venerate a First Class relic of a small fragment of the Blessed bones. The framed tapestry, relics and the altar flowers that weekend are being donated by a parish family who wishes to honor all married couples for their unselfish love, for their “fiat”, as they say, “yes”, to every childconceived in their union of sacramental love, a living sacrament and example like Louis and Zélie. The framed tapestry will bepermanently placed in the shrine of St. Thérèse and the relic of the Blesseds in the relic cabinet in the back of church. We express ourthanks to this family who so generously donated these religious objects to our parish community.

Bienheureux Monsieur et Madame: On Oct. 19, 2008, for the first time in the history of the Church: a married couple, the parents of a daughter who is a saint and a Doctor of the Church, were beatified in Lisieux, France. 15,000 faithful attended the celebration. Louis and Zélie Martin were not beatified because of Saint Thérèse of the Child Jesus and of the Holy Face. They were beatified in recognition of the virtue and holiness displayed, by the grace of Christ, in their own life. Two months before her death, Saint Thérèse wrote to the Abbé Bellière: God gave me a father and a mother more worthy of heaven than of earth; they asked the Lord to give them many children and to let them all be consecrated to Him. (July 26th, 1897).

The Challenges of Life: The Martins had nine children, four of whom died in infancy. Of their five daughters, one of them, Léonie, was a very difficult child, furrowed by the emotional complexities that would follow her even into adulthood. Louis, a watch and clock maker and Zélie, an expert artisan of lace, operated their own businesses. They were familiar with the challenges inherent in dealing justly and patiently with employees and with customers. In the Martin household the needs of the poor were never forgotten.

Suffering: Both Louis and Zélie were stricken by disease. Zélie died of breast cancer on August 28, 1877. Louis, a widower with five dependent children, was afflicted with a humiliating brain disease and confined in a psychiatric hospital. During occasional periods of remission, he devoted himself to his fellow patients. He died at home in 1894 at the age of 71.

Holiness: Les Bienheureux Monsieur et Madame Martin prove to married couples that a great holiness is possible, even in the midst of a family life marked by difficulties and sorrows.

Prayer for the Canonization of Blessed Louis and Zelie Martin

Beatified as a Witnesses of Conjugal Love

God of eternal love. You give us Blessed Louis and Zélie Martin, the parents of St. Therese, as an example of holiness in marriage. They remained faithful to You and your commandments in all the duties and trials of life. They desired to raise their children to become saints. May their prayers and example help Christian family life blossom in our world today. If it be your will, grant us the grace we now ask of You through the intercession of Blessed Louis and Zélie Martin, and let them be counted among the Saints of the Church, through Jesus Christ our Lord. Amen!

Blessed Louis and Zélie Martin, pray for us!